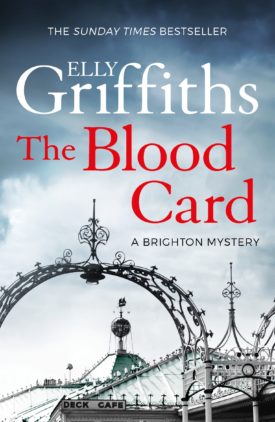 Elizabeth II’s coronation is looming, but the murder of their wartime commander, Colonel Cartwright, spoils the happy mood for DI Edgar Stephens and magician Max Mephisto. A playbill featuring another deceased comrade is found in Colonel Cartwright’s possession, and a playing card, the ace of hearts: the blood card. The wartime connection and the suggestion of magic are enough for him to put Stephens and Mephisto on the case.

Edgar’s investigation into the death of Brighton fortune-teller Madame Zabini is put on hold. Max is busy rehearsing for a spectacular Coronation Day variety show – and his television debut – so it’s Edgar who is sent to New York, a land of plenty worlds away from still-rationed England. He’s on the trail of a small-town mesmerist who may provide the key, but someone else silences him first. It’s Sergeant Emma Holmes who finds the clue, buried in the files of the Zabini case, that leads them to an anarchist group intent on providing an explosive finale to Coronation Day.

Now it’s up to Edgar, Max and Emma to foil the plot, and find out who it is who’s been dealing the cards.