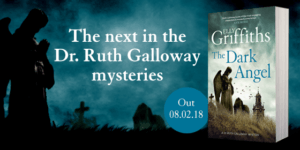 An update from Elly

Well, it’s been a busy six months. I finished writing Stephens and Mephisto 4, The Vanishing Box, on New Year’s Eve (also a good way of avoiding helping with the cooking for the party we had rashly decided on giving) and started Ruth 10, The Dark Angel, the next day (complete with hangover). It’s always a bit strange switching between the series. The Ruth books are in the present tense and Stephens & Mephisto in the past and, of course, the protagonists are very different. But – touch wood – I’ve always been able to ‘get’ Ruth’s voice as soon as I start writing and it’s lovely to be with her again. It’s a great moment for me when I’ve introduced Ruth, Nelson and Cathbad for the first time and feel that they’re all together again.

As well as writing the books and doing all the other real life stuff I’m programming the Theakstons Old Peculier Crime-Writing festival this year. It’s a great honour to be asked (the previous chair was Peter James) but also a lot of work. This year’s festival theme is ‘generations’ and we’re celebrating thirty years of Rebus and twenty years of Jack Reacher. We will also be putting the Agatha Christie archive on show for the first time. The festival is based in The Swan Hotel Harrogate, the place where Agatha Christie was found when she disappeared in 1926. The 2017 guest of honour is Lee Child and other guests include Kathy Reichs, Dennis Lehane and fab Swedish writer Arnie Dahl. There’s also a special event with Ann Cleeves and Brenda Blethyn, who plays her wonderful detective Vera in the TV series. I’m writing an archaeology-themed after-dinner murder mystery for the Saturday night and Francis Pryor (of Time Team fame) has agreed to be the special guest. My main worry is that I will be too enthusiastic when I meet these luminaries. I have a tendency to jabber uncontrollably when excited. On the other hand, when I met my hero Reginald Hill for the first time and he asked me, very graciously, what my first novel was about, I could only stammer ‘NNNNorfolk.’ ‘Oh,’ said Reg kindly, moving on.

The other excitement is that I finally have a garden office. I have written sixteen books in the space referred to by me as ‘the study’ but seen by the rest of the family as a place where they can watch TV, play on the Xbox, practise musical instruments etc. Andy has also taken to filling it with tat (sorry, priceless antiques) that he has bought at auctions. So, at the moment, the room contains two sofas, a day bed, a broken chandelier, four guitars and a collection of First World War prosthetic limbs (don’t ask).

For years I have dreamt of my own writing space in the garden and finally it’s here. I moved in last month. My only worry was that my cat, Gus, who always sits with me when I write, wouldn’t make the trek to the top of the garden. But, that first morning, as I sat staring at the screen (otherwise known as writing) there was a disgruntled mew at the door. Gus  had come to join me and now has his own special chair (see pic below). 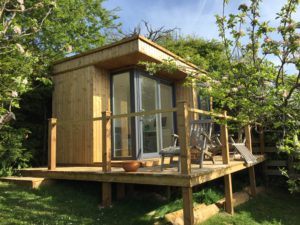 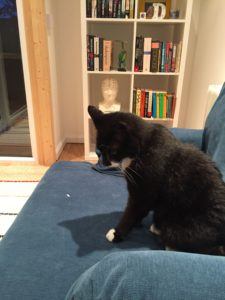 Gus inside the writing shed

I’m now halfway through The Dark Angel. It’s set in Italy, in the Liri Valley, where we have a small apartment in a hill-top village. I’m really enjoying the setting but, in this book, the personal relationships have become more complicated than ever. I know it’s my own fault for getting them in this tangle but, somehow, I feel that the characters have done this despite, not because of, me. I wanted Ruth to settle down with Frank; it’s her problem that, for her, no-one will quite measure up to Nelson.

I have also just checked the final proofs of The Vanishing Box. Gus was a great help. I enjoy checking proofs. I was an editor for many years and think I’m quite good at finding the typos. This year, though, the lovely Therese at Quercus spotted a huge plot hole that had quite passed me by. A few tweaks and it was solved but this is why you need an editor. In this book it is December 1953 and a ‘tableaux’ act is on the bill at the Brighton Hippodrome with Max Mephisto and his daughter, Ruby. These acts were very popular from the 1920s to the 1950s when it was permissible for a woman to appear naked on stage as long as she didn’t move. The semi-naked women would form tableaux representing famous pictures or historical events. When a woman is found, strangled and gruesomely posed to resemble one of these scenes, DI Edgar Stephens has a murder investigation on his hands. The Vanishing Box will be out on 3rd November 2017.

I can’t believe that next year marks ten years of Ruth. Although, in another way, it feels as if I’ve known her forever. To mark the occasion I thought that I’d look back at the previous nine books, maybe adding some details that readers didn’t know.

Click here to sign up to my newsletter and receive information about all the Dr. Ruth Galloway Mysteries each month 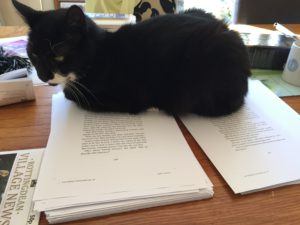 Gus and The Vanishing Box proofs