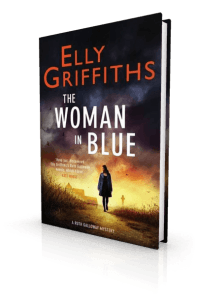 The Woman in Blue is Out Now!

The Woman in Blue is out on February 4th 2016.  It’s the eighth book in the Dr Ruth Galloway series and is set in Walsingham, a medieval pilgrimage site in Norfolk. Cathbad, the druid, is cat-sitting for a friend when he sees a mysterious woman in the graveyard, dressed in white with a blue cloak. Has he seen the Virgin Mary herself? But then a girl’s body is found in fields a few miles away. The girl – dressed in nightdress and blue dressing -gown – is a patient at a local drug rehabilitation clinic called The Sanctuary.  Nelson is investigating the murder when Ruth receives an unexpected message from an old university friend, Hilary, who has become a priest. Hilary has been receiving abusive letters mentioning a woman ‘clad in blue, weeping for the world’. Could the letter writer be linked to the death of the woman in blue? Much against her will, Ruth is dragged into a case involving priests, sacred relics and an unholy obsession.

“Ruth Galloway is one of the most engaging characters in modern crime fiction.” Kate Mosse

“Warm, comforting and deadly.” Upcoming 4 You